Black and White or Color? 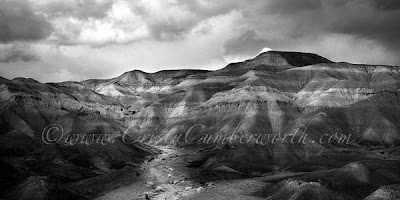 On my way back from Competitive Trail Ride in Arizona, I stopped to take some images of this clay hill formation near Tuba City. The light was very dramatic. I processed the image in color and just for the heck of it I tried it in black and white as well. To me, both are equally satisfying. 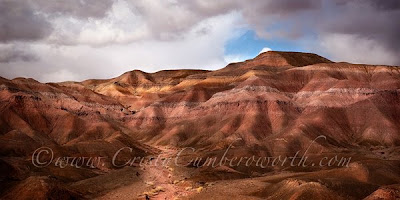 Posted by Ristyz at 2:15 AM No comments:

My sis-in-law called, "You know where that little orchard is? The one over the hill from here along Pinon Hills? Well, there's a pretty big fire over there. You can see the flames in the trees along the creek jumping into the air!" So, I drove over there to rubberneck. Camera in tow, of course. 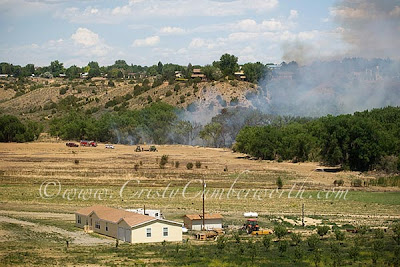 I'm attached to that little area of land. I grew up in that valley and used to ride up the wash under the Cottonwood trees almost every day for years to get out to Chokecherry Canyon. I knew the land owner. I knew the land before 30th street was put in right across the middle of his cattle field. I knew it before Pinon Hills, the northern bypass around town was built. I remember when it there was just a little dirt road that crossed the usually dry wash and went between the cattle field and the alfalfa field. The wash was often damp under the surface during the irrigating season as it was the end of the irrigation ditch. I saw that wash once, as it raged after a rainstorm, bury a truck up to the open windowsills in sand. 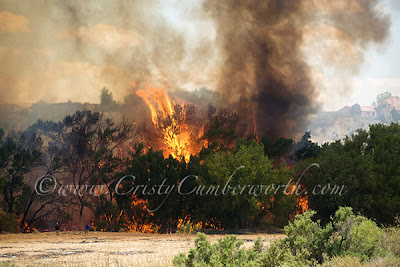 That wash helped cultivate my interest in wildlife. It often hosted deer, foxes, coyotes and a multitude of birds. The irrigation ditches around the outside of the alfalfa field (three of them right next to each other) honed my skills in controlling my horse and our trust in each other. We could cross the ditches but you had to jump, stop, jump, stop, jump. The inside ditch was smaller than the other two and the distance between each of them was just barely over a horse length. 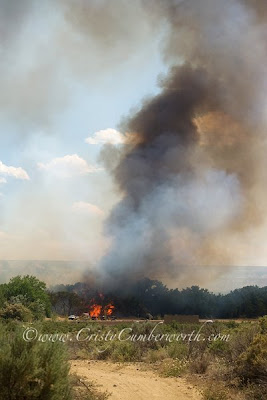 That was long ago. Now that section of land is divided and belongs to the children of the original land owner. I no longer live in that valley so no riding access is needed there anymore. The cattle field, while smaller due to the road running through it is still there. The alfalfa field is gone and now there is a house and young orchard in part of it. The other part of it is a corn field in some years. Other years it does nothing. The land owners children take good care of it and haven't sold it off to developers but it's just not the childhood patch anymore. 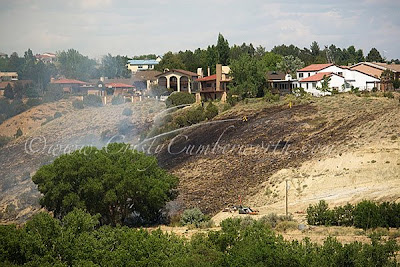 It was sad to see all the trees on fire after knowing it so well the way it was for so many years. The fire was started by a controlled burn way in the middle of the field, all precautions taken. Sudden winds took the wrong spark into the trees and it was out of control fast. Once it started the trees, it ran up the tinder dry hill towards the houses. They evacuated five blocks and had two ladder trucks on the streets closest to the valley for keeping houses safe. 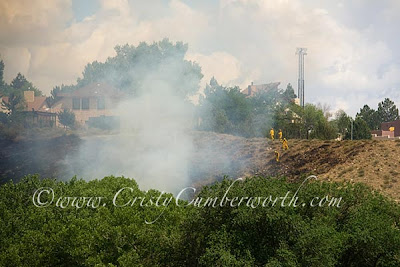 It was in the city limits but the only fire hydrants were in the subdivision on top of the hill so the local fire department called in to some of the county stations with tanker trucks. As the fire crept south down the wash closer Glade Road, they stopped all traffic on 3oth street and accessed a hydrant down there a ways too. They soaked the trees and ground within reach of that hydrant but fortunately the fire never made it that far. The winds died down and soon all was well. 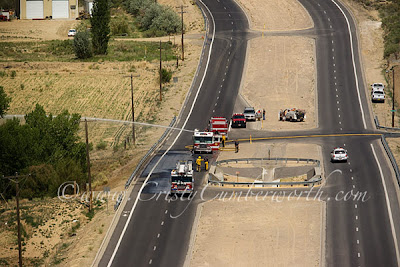 I eventually went up on a hill to watch and ran into the oldest son of the original land owner and we ended up talking for a good long time. I hadn't seen him in well over 15 years so we had a good bit to talk about even though we have nothing in common and we never did much more than wave when I lived in that neighborhood. He told me how the land was divided between the siblings. Why the one sibling had abandoned his house and built another below it. (The ground settled by about 10 feet and rendered the old house to storage only). 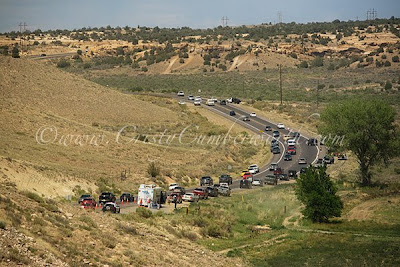 He told me his dad had planted all those cottonwood trees, there were none north of the farmhouse! He pointed out all the area he cleared just a few years ago on his part of the place, just to avoid such a hazard. It was good to talk and do a little bit of reminiscing as we watched a good section of it burn away. It will be back. It will just take a while.
Posted by Ristyz at 1:00 PM No comments:

I really should be working on my horse show images, however, I got called out at the last minute to do a shoot that I knew would be an experience. So I agreed to get up at early o'clock and go shoot some arial images. 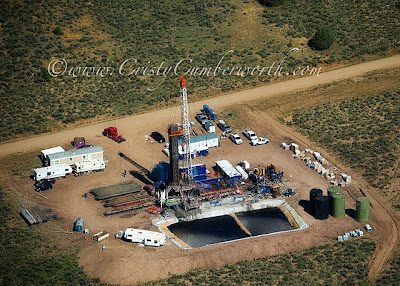 I live smack dab in the middle of one of the largest natural gas reservoirs around. Currently, they are drilling like mad and have been for several years. It's really scarring the landscape. Now, while I'm all for drilling, I think they could be a lot kinder to the land when they do it. It seems like they just plop a well any ol' place with no regard to private property or the impact on the land, particularly to the ranchers. While that's not entirely true, they do have to get permits to drill where they do, I still think it could be done with less impact. Twinning wells (putting more than one well on a cleared well pad and taking better care of all the roads they plow through the land would be a really great start. 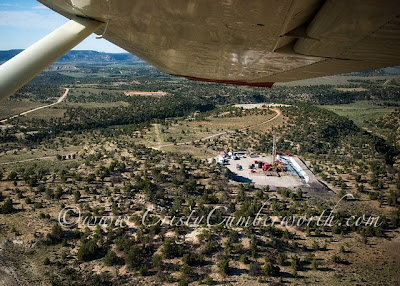 Fortunately, I'm not the only one that thinks this. I know someone who is trying to make an impact on the huge number of well locations and he hired me to go fly and shoot some images of how so many wells spread out across the land makes an impact. Keep in mind the goal IS NOT fewer wells, only fewer locations. Growing up, I remember there was a limit of two well locations for each section of land. About the time I was in High School, they upped it to four. 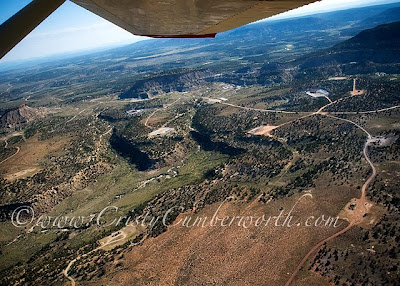 Now it's has escalated to about 125 wells allowed per section of land. When all of these well have individual pads, well, it's getting ugly. It's a bit silly when we have the ability to drill directionally and to the multiple layers from one location. 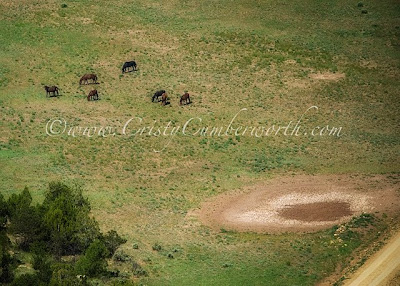 On the way back from our jaunt in the air, I talked the pilot into taking a slight detour over the area where the wild horses roam. I didn't really think I would be able to spot any but I was hoping. We did! We found one large band with one foal. I took a few shots and the pilot circled around so I could have another pass at them. We came in the second time a little lower and just as we went by they turned and galloped off a few hundred yards. I guess we got their attention but only bothered them for a few moments. 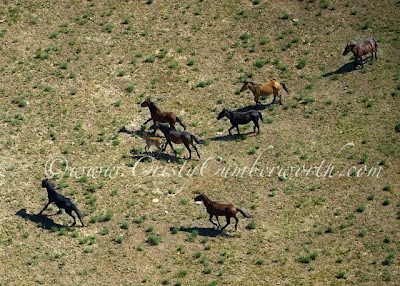 From the looks of the water source, they will be heading up in elevation soon where there will hopefully be more water. The lack of water will drive all the bands closer together. Perhaps if I get to go visit them again this summer I may see more horse action as the herd stallions have discussions about their proximity to each other. Well, back to the salt mines.... Now I have two jobs to get posted in a short time!
Posted by Ristyz at 1:08 PM 3 comments:

Fixed, then suddenly not so fixed.

I recently sent my camera in for a tune-up and cleaning. It needed the sensor cleaned of dust and it just wasn't speaking to my lenses very accurately 100% of the time. Close just isn't good enough. I also sent in my workhorse lens, a Canon F2.8 L 70-200. It has done the majority of my work for about 7 years and through 3 cameras. The zoom dial was getting stiff. I got the camera and lens back in a timely fashion and took it to my next event, an FEI level 3-day Event and horse trials in Parker, CO. All seemed well until the middle of the second day, out on the cross country course. My camera did the unthinkable.... it just quit. I couldn't do anything to make it go again so I let my hired second shooter, Amy E Cody know I was leaving the course for the spare camera. 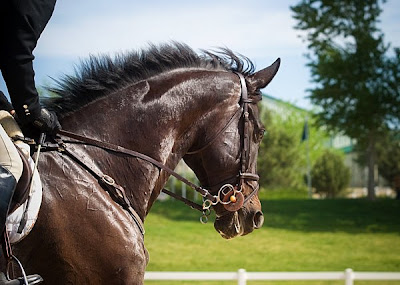 Amy is a treat to work with. She works hard, doesn't quit, isn't daunted by long hours (11 hours in one day on the cross country course alone) and does good solid work with very few misfires. She knows how to have fun with it too. We also team up to shoot a pair of hunter/jumper shows back to back, in her neck of the woods. The Grazing Fields Farms Head of the Bay Classics.

In the meantime I missed about six or seven riders while I got out the spare and checked to make sure it was healthy. It's expensive to have two of everything. Back-ups are required to do any kind of photography. Professional professionals will have backups. I went to this event with a back-up for the back-up even. A third camera that I borrow from my parents that accepts all my lenses for when there are no excuses for not getting the job done. Amy also brought a complete back-up camera and lens set. We didn't have a shortage of cameras but it's still a big thing when your lead camera dies suddenly, especially only 1500 clicks and less than a week after it's tune-up!

The unfortunate thing is that I had to send it back to the manufacturer and will likely not get it returned before my next large event, a jumping Grand Prix with some international level riders. For this event I will be working with another peer and friend, Lynne Glazer. Another talented and extremely dependable photographer and one of my best friends. I will take along said parents' back-up and Lynne will bring along her two full sets of equipment as well. We get along even better, technically, because we have the same brand and all parts are interchangeable between us.

Well, back to post processing and editing images from the last event! Amy and I shot over 6400 images in three days that I have to process. You can see them here: Oh, and I'm happy to report that the lens is as awesome and crisp as ever!
Posted by Ristyz at 4:27 AM 2 comments: