Birth of a Foal 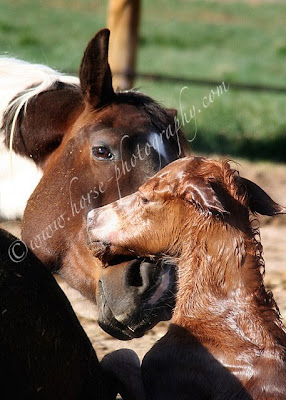 Ever since I can remember, I've wanted to watch a foal being born. The first time I got to witness it was when I was ten years old. My mom bred her mare and during the last few months of gestation, I read an illustrated Equus article over and over trying to memorize all the important things you should do or make note of. I was also the lucky one, laying on the couch we had moved to the sliding glass door to oversee the barn stall, that saw the beginning and alerted the "masses" (my mom & dad). Being a lot older than 10 now, I don't remember much other than it was really cold that night and it was a filly. 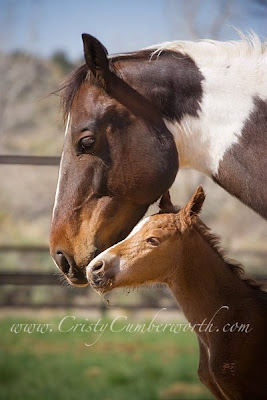 Since then I've witnessed only one other birth. There were plenty of near misses. Another filly by the same mare.... born just minutes before I got off the school bus. A few years later, I watched the mare all day and went into eat dinner. I came back out a half hour later to feed all the horses and voila, there's a newborn standing there. The next one I DID get to see. It was the first foal of that very first filly I saw being born when I was ten and, of course, it happened before I evolved into being a horse photographer. Now I want to photograph the birth of a foal.

I have a friend that occasionally breeds a mare or two. I'm at her mercy, or, her mare's mercy, to meet my goal of photographing a birth. It's not easy, they all choose to have them in the middle of the night or when I'm gone far away at an event. Heck, those mares are tricky, they often even wait for my friend to be away at an event! (Not to worry, they weren't left unattended to.) This year there were four chances. Two of her mares and two visiting mares. 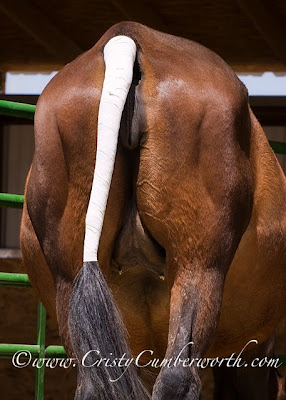 Mare #1 - Gave me lots of "I'm soooo ready" stock shots, waxed, flaccid, round and relaxed: textbook. Foal born at 2am. Mare #2 - a maiden, not much warning, but at the same time, ready for days, foal born at 2am. Mare #3 - foal born at 8:30 am!!!! I got the call, but alas didn't get there in time to get birth shots. Some dummy (me) had taken the camera bag out of the car after the trip to the racetrack so I had to make a trip home to fetch it. However, my friend had it covered. She got many and many and more and everything that I had hoped to catch. I got there in time to see him in his semi dry glory trying to find and figure out how to work lunch. 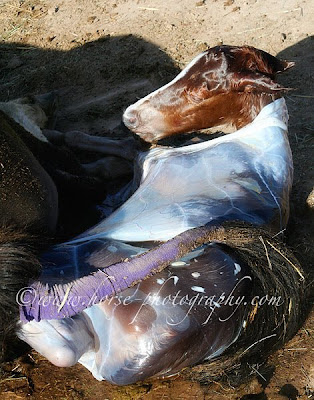 This mare had a nice clean stall with fresh straw but she also had a mind of her own. She waited until they let her out of her nice clean stall in the morning. Almost immediately, she foaled in the dirt paddock. Go figure.