The night of Rocky's death, Robin learned of another foal that had lost his dam. The foal was a Paint who had lost it's mother to severe founder a week before. He had been hanging on with some bottle feeding and force feeding via a nose tube but it wasn't looking good. The foal's owner was at wits end because the baby had rejected nursing from a bottle after a day or two, was not interested in drinking anything from a bucket and feeding via a nose tube was too expensive since it has to be done by a veterinarian and it really couldn't be done often enough to sustain him. Ozzie was going to be his last chance at a normal life.

The next day we put Ozzie in the trailer and hauled her an hour away to a small place to meet the orphaned foal and see if she could possibly be of any service to the waning baby. The owners had a second mare and foal but that mare would have nothing to do with the orphaned foal. Upon our arrival, the owner took the foal from the pasture where he was trying to gum the grass to smaller quarters for our acceptance test. The foal just walked quietly beside the man with it's head down. There was no spring to his step at all. It was so sad to see him just living but with no purpose or joy of life. 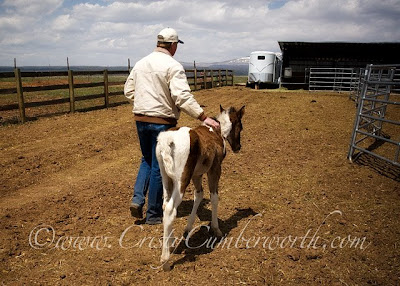 At first sniff, Ozzie was keenly interested in the little fellow and we all cheered inside, but then she pinned her ears back hard and tried to take a bite. Our spirits fell. 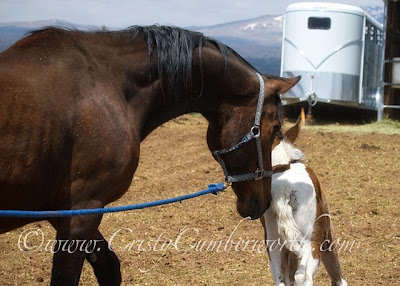 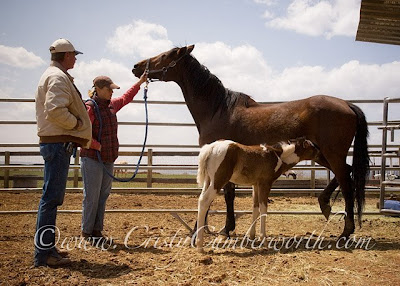 We pinned Ozzie up against a fence and brought the foal to her blind side and kept a tight hold of the mare's head. We got the foal up beside her and pointed his nose to the right place. Once he got a whiff, he latched on immediately and started suckling! He was scared of Ozzie and every time she moved or kicked he flinched and pulled away but he would immediately go right back to it the first chance he got. He was starving. He suckled for about 20 minutes. 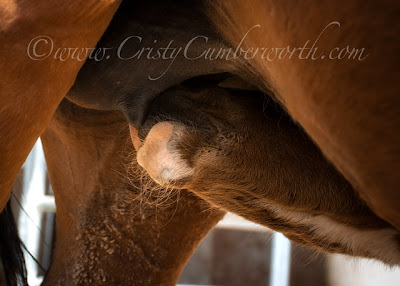 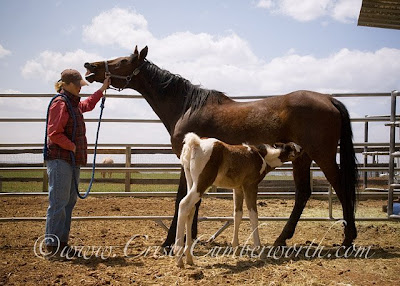 After a bit Robin let Ozzie start to smell him up close, she said he stinks! She also lifted up her leg some more in aggression but didn't try too hard to kick him. We let her leave him for about 15 minutes and then tried to socialize them again with still mixed results. Most everything i have read says that a potential nurse mare will either accept the foal fairly fast or it will be a total lost cause. Because of her blind side, it was quite easy to let him norse while someone held her. 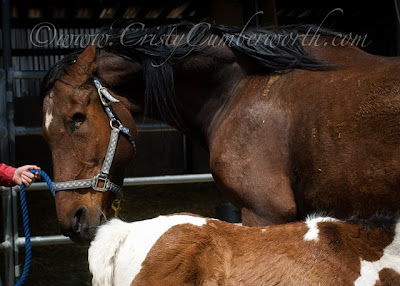 Robin decided to leave Ozzie there with the owners, who if nothing else, could at least go out and hold the mare for the foal every couple of hours. This was an acceptable compromise to this baby potentially dying of starvation or leading a poor quality life due to poor nutrition as a foal. 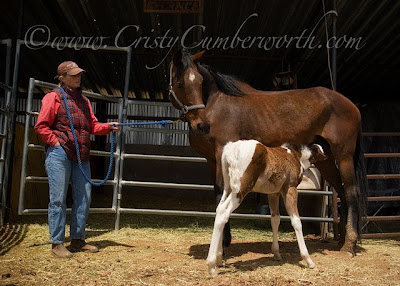 I was never able to make it back up to the place to see how they got along, but I had reports that after a couple of weeks Ozzie did fully accept the foal and spent the rest of the spring and summer raising him on a full green pasture. It was the best possible ending to the sad stories of Ozzie and Rocky. 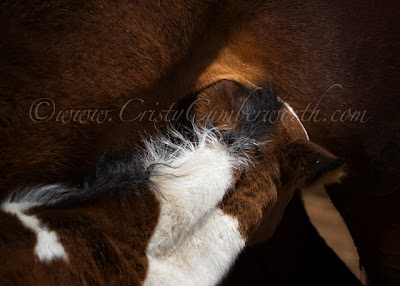