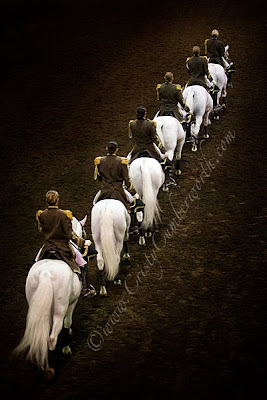 A few days ago, the "World Famous" Lipizzaner Stallions show came to town. Over the years I have accumulated many memories of the Lipizzan shows. I have had the pleasure of seeing them several times. At one, I talked my parents into purchasing one of my very first Breyer models a very long time ago, it was the Lipizzan in the levade pose. I still have it (and have collected many, many more Breyers since). I drove through the closest thing Albuquerque can get to an ice storm one January to view them again. That was also the first time I thought of photographing them since I had been blessed with the gift of front row tickets! 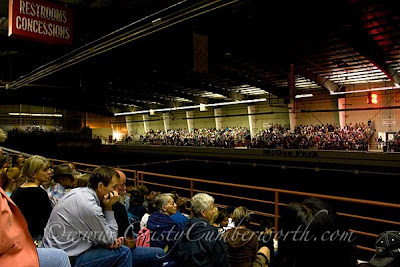 The lipizzan show has always been very good about allowing photographs by the audience in the past. This tour was no exception. The only rule was no video and the venue also was fine with cameras. So, of course, I took mine. When I first arrived I was disappointed that there were not going to be any spotlights. It was all just under the coliseum's regular mercury vapor lights. I was worried that any images I took were going to be a waste as I had to set the camera to 1600 ISO and use the lens at it's widest aperture, 2.8. I thought I'd give it a try anyway. While waiting for the show to begin, I noticed the storm that had been on the horizon had gotten a lot closer. Close enough, in fact, that we could see lighting and hear thunder in a all but completely enclosed building. 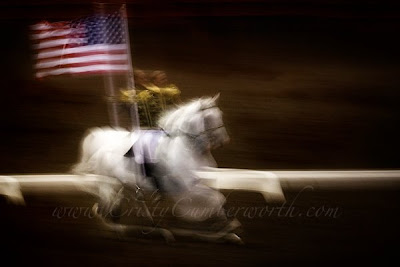 The rain started, and so did the show...... well, for a minute anyway! Lightning struck one of the power poles just outside the building and the place went dark! A few moments later, I could see sparks raining down by the outdoor arena through the one open door at the end of the coliseum. I thought, well, there goes this show. After a few minutes, the power came back on but only the lights over the audience and the PA system. It was VERY obvious that the PA came back online due to the LOUD hum coming over the speakers. After trying to reset the power again, it was still humming and the coliseum staff finally cut it off and rerouted some wires and we again had sound without a hum. The announcer noted that there was a live wire down outside and that had created the hum but they were good to go again. I was ready, except for the fact, the mercury vapor lights were not yet warmed up. No worries, they did manage to get to almost full brightness by the time the announcer finished his introduction and soon he had us all singing the national anthem together. 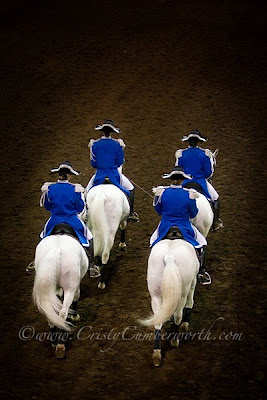 This show is all lipizzans. They have only one Andalusian and that horse only does one solo. This is also a great show for the non-horsey sect since throughout the show they give a short demonstration on some of the dressage movements to help the audience know what parts are special. They show the difference between walk, trot and canter as well as collected and extended versions of each gait. They also point out several of the more difficult moves such as the two-tempi (a change of leads every two strides of the canter) and the piaffe (very collected trot with close to no forward movement). They show the moves but they also keep it short and sweet so they don't lose the non-dressage audience too much. For the audience members that know dressage, most of the moves are executed fairly accurately although once in a while the riders will let the horses get a little sloppy. However, horses will be horses, and they have good days and bad days and they do this show several times a week so they can get bored with it too. 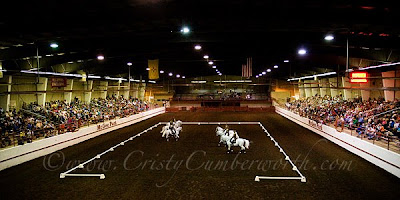 After the show started, I made my way to the walkway over the entrance of the arena so I could see the dressage arena from the long end. This turned out to be a great place from which to shoot. I got to shoot directly down on a few of the riders as they entered and exited as well as seeing the patterns from a vantage point that made them almost symmetrical. Plus I could see just about the entire audience as well. It made the trip that much more fun and interesting for me since I didn't have the option of spotlights to light up the horses. I love the Pas de Trois, a ridden pattern with 3 horses, the Pas de Quatre with 4 horses and the Quadrille, which had 6. 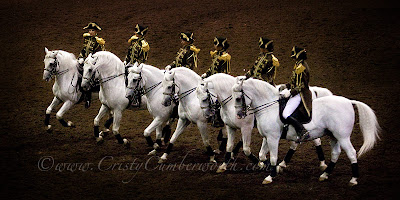 Between the multi horse demonstrations, they also showed the "Aires Above the Ground", the Lipizzan's specialty movements that were originally taught to them as maneuvers for war. They also offered up some of the history of how the horses were saved by General Patton from potential destruction during WWII.

Overall it is an entertaining and educational show for both horsey and non-horsey folks alike, without being too basic for horse-lovers or too specific for the non-horse owners. You can see more images from the show in my gallery.
Posted by Ristyz at 12:42 AM 3 comments: