Over the Memorial Day Weekend, I went back out to visit the semi-local wild horses again. When I first arrived the only wildlife to be seen was cows. The ranchers are starting to haul cows out to the summer grazing leases so they are all over the roads and I had to be on high alert for the bitty ones that dart to and fro'. Other changes since the last trip three weeks ago is how lush it has become. The area has had a lot of rain in the last two weeks so there is plentiful grazing for everyone and all the scrub oak is leafing out resulting super pretty, colorful and photogenic backgrounds.

After dodging the cows, I drove along the roads where the horses are usually often seen. Nothing, nada, zip, zilch, not a one showed up in a usual or unusual area. It was midday, they were hiding in the trees. Finally, one of the bands from three weeks ago put itself in view, but not in a very photographable time or place so after just watching them from the car for a bit, I continued on. It was probably 20 more miles and just a bit short of an area where there is very high gas field drilling activity before any more horses came into view. 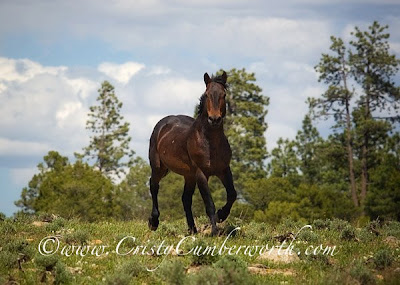 A small band of three. They were standing way at the back of the huge meadow and after a short bit of walking, the stallion saw/heard/smelled me and came over to me to investigate while leaving his harem in the back of the field in safety. Safety... haha, they were oblivious and still grazing, truth be told. It wasn't until the stallion came very close to me and stopped and snorted that they became aware. I stayed in the shadows and he trotted back and forth in front of me for a bit and then took off back to his harem, one of which was very lame and thin. 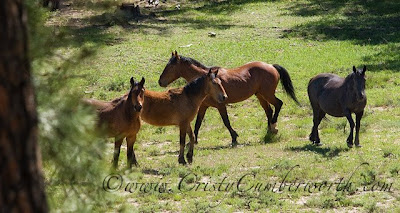 Back in the car, soon I came across another band. It turns out it was the very shy band that was in the Ponderosa forest on my prior visit. This mare, affectionately called Big Momma, was huge before and now she's even bigger, she can't be far from foaling, but I thought that three weeks ago too. I snapped a few nice images of them from the top of a little ridge before they saw/heard me and wandered off. 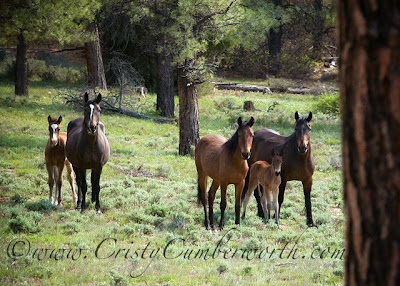 There were several more bands deeper in the trees so I hiked around to see if I could capture them too. It turned out to be a baby bonanza in the trees near a stock pond and two of the stallions got a little close to each other than they like so they took a few minutes to dance and sort it all out. 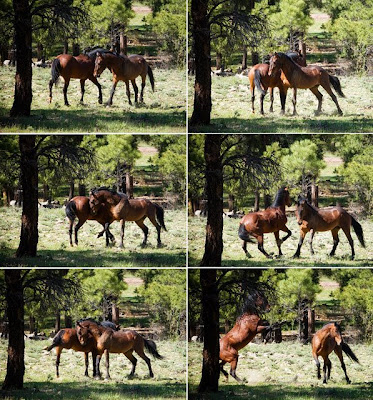 Once they worked all their rankings out without too much fuss, all three bands trotted off through the trees toward the pond. I departed for the car happy that I caught a little bit of action. 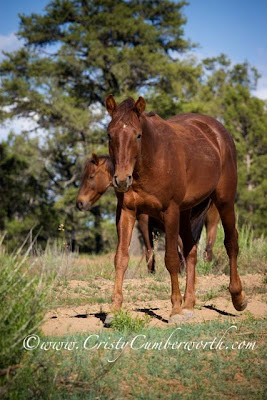 Next stop, a pretty chestnut mare that was standing in the road. When followed through the trees, she led me to her mate, an equally pretty chestnut stallion. He kept playing with me, trotting away and then to me. Looking at me straight on, and then with one eye, all the while keeping one ear on me too. I watched them for a long time and eventually the mare had enough and they disappeared into the trees.

On the way back to the main road, I spied what looked like pintos way up a valley. It was exactly that. Most of the horses in this area are bay or chestnut so it was a treat to see some of the few with color. The more colorful horses also seem to be more flighty but it could be for the protection of the new foals. 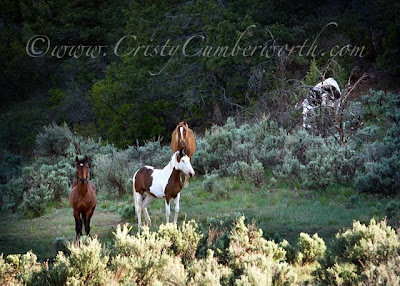 After hiking about a mile into the valley through the trees I was able to see the very young foal in the group, maybe only a few days old. I took a few snaps but the stallion was highly agitated and wasted no time taking the band into the trees. I took the cue and left them alone while they continued through the trees on the other side of the valley.

After hiking the mile back to the car and driving down a different road, I found another colorful band that was within reach of the car. They too, had younger foals and decided to head into the trees but much more casually than the prior band. 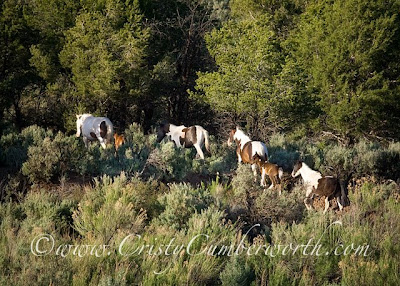 The sun was getting low in the sky and by this time I had seen over 45 different horses so I decided to head for home. As I was heading back up the road that leaves the main valley to go back towards the land of cows, as a last minute treat, I find another band just walking down the middle of the road. They yielded into the sage as I approached and gave me a very nice pose in the setting sun as a parting gift. 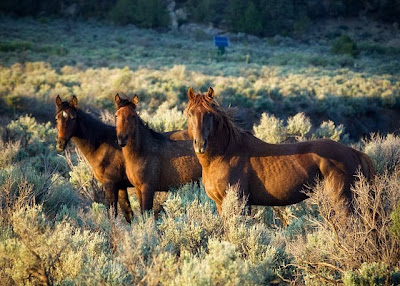