The New Cat in the House

Petfinder.com is a dangerous place. If you spend even a short amount of time there you are sure to find something you always wanted. I've found two cats there, first was 2 years ago: Cecil. I had been surfing there looking for a special face only a few weeks after my Ollie had to be euthanized due to a rare heart condition called Dialated Cardiomyopathy. Cecil turned out to be an awesome cat as well as a Bengal. I didn't know that when I was looking, I was after a certain face and some stripes... gotta have stripes! 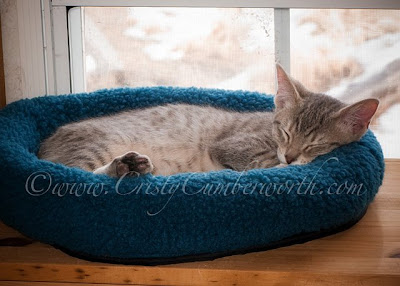 So here I am 2 years later and I ended up on Petfinder again. Cecil is a busy cat and he wants so badly to be super friends with Squeak. While she will play with him, she refuses to let him sleep with her or groom her. She'd also really like for him to leave her alone more often too. He's just way too busy for her taste even though they are the same age. I had sort of been keeping my eyes peeled for another homeless Bengal so I could be sure that I would get a cat with Cecil's desired energy level. I didn't find any near enough to me to rehome and while I just LOVE the Bengals, I really couldn't justify buying a cat. There are so many "cat-off-the-street" cats that need homes far more than purebreds who find homes fairly easily, so I started browsing cats at the local shelter on Petfinder instead. 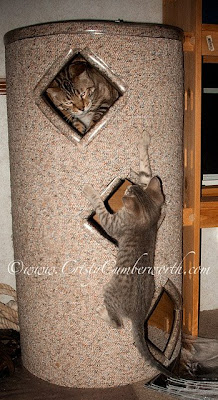 It's true I was contemplating a new cat but I wasn't looking real diligently. I went to Petfinder only 3 times over the course of 6 weeks and the third time I found "the face" and it had stripes too! Bonus that it was tiny as well and was at the local shelter. The next morning we had about six inches of snow but that didn't stop me from being the first one at the shelter to get my cat! I made it there about 10 minutes before it opened and sat in the car hoping that he would still be there. They opened, he was there! I stuck my finger in the cage and he bit me! Not maliciously, but tasting. I called him a brat and proceeded to fill out the paperwork to make him mine.

So, home we went, a new nameless kitten and I, me-owling all the way. I made an appointment at the vet to have him tested for Feline Leukemia, he passed with flying colors and also got his Leukemia vaccination. Now he can be turned loose with the clan. Cecil was immediately impressed and curious, Squeak; not so much. She told me under no circumstances did she need a new friend. Cecil was all over the little kitty. After a few days Squeak did lighten up and Ivan revealed to me his name. Ivan also revealed to me his desire to have some "pink stuff", antibiotics for that sneeze that every kitty cannot escape the shelter with. He got what he needed and is very happy now. He shared his sneeze with Squeak as well, but she got over it on her own. 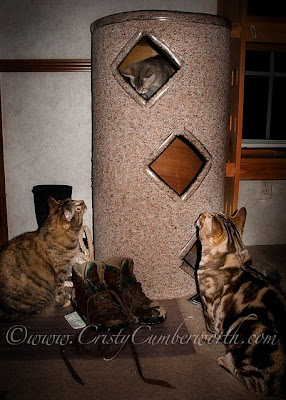 Ivan has no fear. He is bold and will has yet to learn to be afraid of the front door opening. I have caught him trying to follow me or the dog out a few times. I'll have to work on that some more. So far, trying to push him aside with my foot is not impressing him. The first day he claimed "his" cat boat by the window and that night "his" spot on the bed. (I tried to have him sleep in his own room for his safety that first night but he seems to have figured out he can fit under the door... even with a rug jammed under it!) He has also tried to climb up my leg but to his (only slight) dismay, that action has been consistently received with loud yowls and an extreme cat "loosening" dance combined with a reflexive backhand swipe. I've started to carry around a water sprayer. Gotta nip that in the bud NOW! Dang kittens!

Ivan and Cecil LOVE each other. I had no idea that Cecil's greatest desire on earth was to become a Mother Hen. He plays with Ivan, gently tortures Ivan, follows Ivan, shares toys with Ivan, grooms Ivan and sometimes naps with Ivan. He even seemed to take on the role of showing Ivan the ropes (aka the cat fountain). 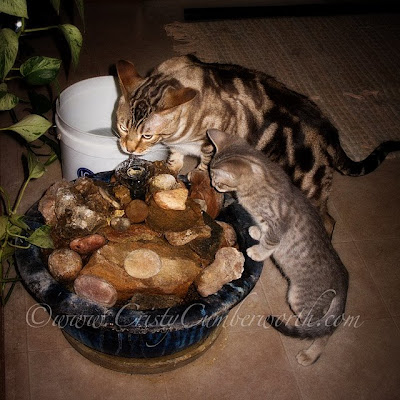 When he tires of Ivan, he just pins him down. Ivan often leaps onto Cecil's head and back from nowhere and Cecil tolerates him. 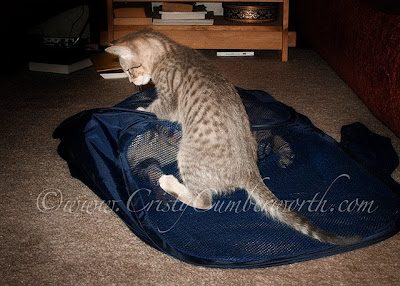 Often I will see Squeak watching from a safe distance. Occasionally she moves for a closer view. Overall she has been much more tolerant of Ivan than she was of Cecil when he invaded her house. Cecil hasn't completely stopped interacting with Squeak, but she is definitely getting in a lot more of that valuable nap time now. To see some video clips of Ivan and Cecil roughing each other up, click here. I've gotten a few comments from friends and family members about the number of cats I now have. So be it... I guess I'm now well on my way to becoming the crazy cat lady. (I say you're OK 'til you pass four!) 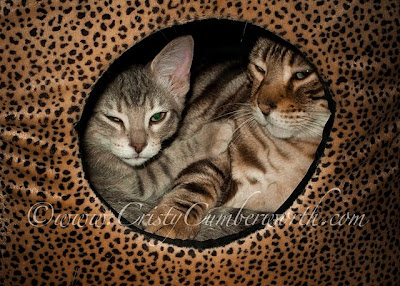 Posted by Ristyz at 1:17 PM No comments: