Yesterday I decided, on a whim, to go to the local race track to see what I could shoot. I wanted to get an image or two worthy of a DPChallenge.com entry. I blindly stumbled across racing history it seems. A 5 year old mare named Peppers Pride was going to try for her 16th consecutive win. A feat accomplished by only 4 other thoroughbreds in history including Citation, Cigar, Mister Frisky and Hallowed Dreams. I don't really follow horse racing other than the Triple Crown so I was surprised to have walked into this photo opportunity.

I started my afternoon by heading to the place where the starting gate was going to be parked for the 5th race to see aobut getting some image of the break from the gate. I chatted with one of the gate crew for a few minutes and the track vet came over and asked me if I was with the newspaper. No, I replied, I'm just out here for fun, I'm a freelance equine photographer. He told me in the ninth race, history may be made. I told him I COULD be the paper if necessary. We chatted a few more moments about other things and he left to do his job and I wandered off to set up to take some pix. I was still pretty clueless to the goings on. 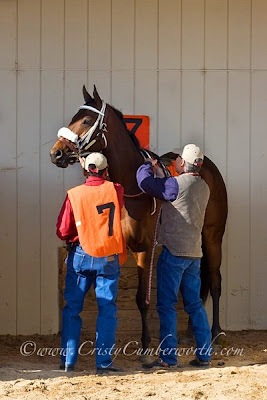 Throughout the afternoon I heard a number of announcements over the loudspeakers and finally pieced together what might happen in the ninth race, a race called the Russell & Helen Foutz Distaff Handicap. I got excited at the potential for sellable images from my day at the races that was once just for fun. Before the ninth race I asked a guy with a program what number was on the horse Pepper's Pride. He kindly told me seven, and look for the owner with the ear to ear smile. I proceeded to the paddock and got a couple of nice shots of Peppers Pride.

All the horses left the paddock so I went to the track to get some post parade images too. The sun was not in a place relative to the horses for the best pix but I did grab a few shots that included Peppers Pride's trainer, Joel Marr on the pony horse. I found the place I wanted to shoot from, and despite my lack of a press pass I was allowed to shoot the race from rail along the winner's circle. It's not quite at the finish post but I was happy none the less. This is a small track so the horses started just to the left of the grandstand and went past me twice.

I got a nice shot, albeit waaaaayyyy over there, of Peppers Pride in the back of the pack! She did not get the best break and at the beginning of the first turn got bumped pretty good but at the beginning of the backstretch she began to make a run for it with guidance from her jockey, Carlos Madiera. Carlos has been her pilot in every one of her 16 consecutive undefeated races. 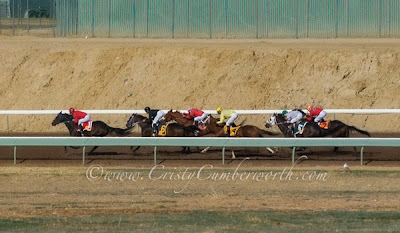 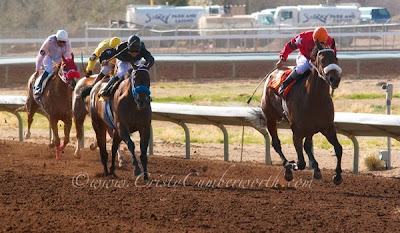 The Scoreboard blocked my view at this point so I didn't get to witness her surge to the front. I was so happy to see that by the start of the homestretch she was well on her way to history..... with her ears up like it was no big thing. 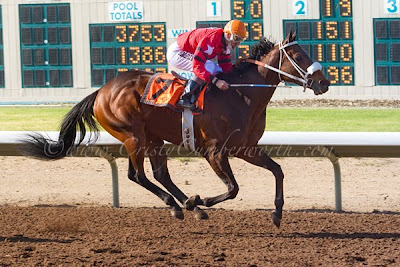 I took a few more pix of the unbelievably happy owners, a shot of Peppers Pride in the winners circle and ran home to try to upload images to news agencies. If I had had a clue about what was going to happen that day I would have done some homework before I left. I had a hard time finding the right places to upload news images on some of the sites which stole too much time from me. 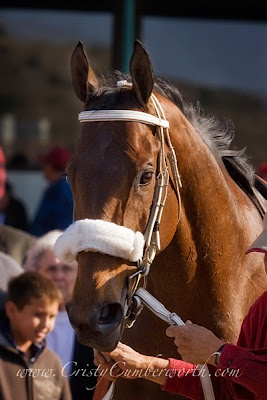 I got some nice images but I'm not a track photographer or a new photographer and just didn't have the contact for immediate release. Oh, well..... there is still the magazines! Maybe some monthly publication will want one or two down the road.

Peppers Pride will try to get number 17 under her girth at some point. If she does, she will be the first and I got the opportunity, even if only on an accidental whim, to see her run! More Images!
Posted by Ristyz at 1:21 PM 1 comment:

So, I have been sitting on this Blog address for about a year trying to figure out what on earth to write about. I decided to call it Horse Stories, nice and generic, so I can be pretty general. Now, to figure out how it all works so I can add stuff.