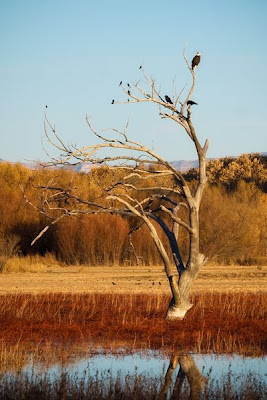 Bosque del Apache is a wildlife preserve in the middle of New Mexico. It lies in once was farmland along the Rio Grande river just south of Socorro, NM. It plays host to many migratory birds in the winter months, including Bald Eagles, Snow Geese, Sandhill Cranes and on occasion, even the super-endangered Whooping Cranes. It also happens to lie along my path home from an event, a small horse trials, in Las Cruces that I shoot twice a year.

The end of the day, with its pretty light is the best time to be there. The best birds are there in winter, usually November-February with January and early February being the peak of the winter bird activity. Of course, it all depends on what the weather is doing as well.

I made a point of getting out of Las Cruces last November in time to get to Bosque del Apache before the sun set. The winter birds were just beginning to arrive in notable numbers so I paid my entry, a paltry $3 for the day, and began to drive the loop. At first there didn't seem to be much activity but before long, a large number of vehicles in a turn-out pointed the way to a Bald Eagle in a dead cottonwood. There was one other serious bird photographer there as well, so we shot and chatted for a bit and every time the bird moved, shutter buttons got pushed. The other photographer, whose name I did not catch, had a true bird lens on; 500mm in Canon L glass! (I want one, of course). I had to settle for scenic shots that happened to include an eagle. No close-ups for me! I didn't mind, birds are not my passion and I got a few very nice landscapes with gorgeous light, an extraordinary tree and a few birds to boot. 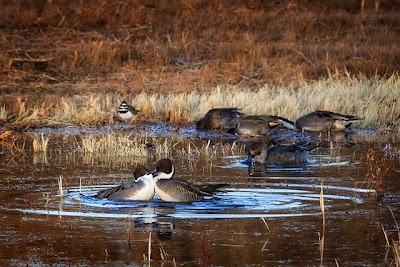 Further around the loop, there were a few ducks in the water near the road, well within reach of my paltry 70-200 zoom. I know nothing about ducks but after a trip through the bird book, they appear to be Northern Pintails. The other thing I didn't realize until I got home and looked closely at my images is that they seem to be having an argument! 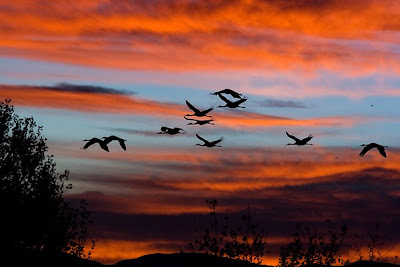 By this time, the sun had set and the light for photography was fading. There wasn't enough light left to get decent images of the Sandhill Cranes and the few Snow Geese that were in a large pond on the north side of the Refuge. then, suddenly, the last rays of the sun hit the thin clouds above and the sky was on fire. Right then some cranes flew by.

The next time I returned to Bosque del Apache was in Mid February, right after another horse trials in Las Cruces. It was a bit late in the year for catching spectacular bird images, however, because it had been so cold up north there was still an amazing number of Snow Geese around. Now, for years I have heard stories of how neat the Snow Geese were to photograph and once I found the pond full of them I felt disappointed. They were not in a pond that was agreeable with the coming lighting conditions. 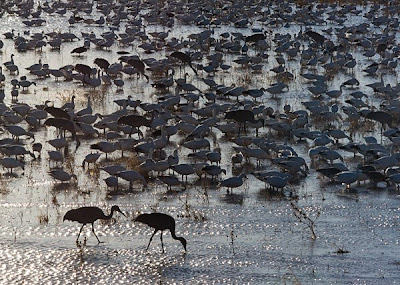 I took a few shots and decided it was not going to be a great day for pics of that particular subject. I continued on around the loop hoping to see some that were not backlit. I did find a pile of cars with a bunch of people overlooking a neighboring pond but there were not really any birds. I stuck around and waited, surely the 50 people, including a good number of photographers with 500mm lenses, standing on the observation deck knew something I didn't.

Then I heard this noise, I didn't know where it was coming from and all the sudden hundreds, no, thousands of birds were flying right towards the observation deck and overhead. Snow Geese! They circled around and landed on the far side of the pond. I was wishing I had one of those 500mm lenses about then. Then they took off again, and circled overhead and landed closer. 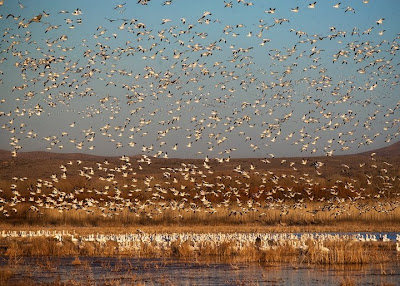 I decided that those with the 500mm lenses were missing out on the whole incredible sight and I was suddenly happy I could back out to 70mm. The Geese did this once more before the sun went down. Absolutely amazing how many geese there were. I cannot even begin to describe the sound every time they took off in unison. It wasn't deafening or anything, but it was loud and rumbly like a freight train. I figured after the sun disappeared they would be done but I stuck around for a little bit more anyway just enjoying the colors of the evening. Before too long the Snow Geese took off one more time for a final display in front of the earth shadow slowly marching across the sky. Now I understand what the lure of the Snow Geese really is and it appeals to far more than the photographer. It is an incredible sight and sound display of the natural world. 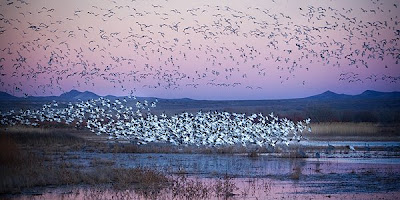