I spent so much time this last 2 weeks making everyone else's holiday desires come to fruition that I never did get around to those snailmail holiday cards. So, Heres to you and yours, best holiday wishes to you all! 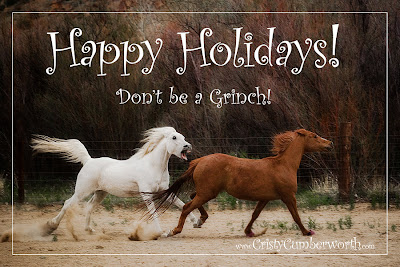 Posted by Ristyz at 2:51 PM No comments:

So, you want to be a pet photographer!

I borrowed a friend's studio light set (thanks Marie, You're the best!) to take for a test drive. I wanted to see if I understood lighting even a little and I thought I might like to take a few images of my pets and my brothers family. I've taken plenty of very nice available light images of them so I thought it couldn't be too hard.

So, first, I set up the lights and the back drop and got the cat's favorite chair and covered it with a fancy piece of velvet. I took a test shot or two, looks all right so I guess I need a cat! It shouldn't be that hard to get a cat on it's favorite piece of furniture, but for some reason they were ignoring it. I know, how about a favorite toy! So I got one of Cecil's all time favorite toys and put it on the chair. Nope, not good enough. I resorted to tossing it on the chair. That got his attention, kinda. He only plopped his front end up there and fetched the toy and brought it back for another throw. In the meantime, Squeak had stealthily moved in under the chair. To Cecil, that was far more fascinating than fetching. 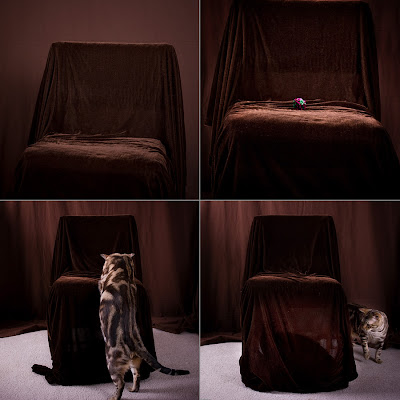 Cecil spent a great deal of time circling the chair with Squeak under it. Every so often she would launch herself at him and take the fabric with her. I kept putting it back up in the hopes that some cat would get ON the chair. Soon Cecil settled down in a "safe" place and just stared at her through the fabric, taunting, daring her to launch again. Squeak got bored with that game and decided to go exploring..... she got on the chair! Under the fabric. Quite amusing, but not very photogenic. Eventually she wiggled up all the way to the top and morphed into Queen Squeak. 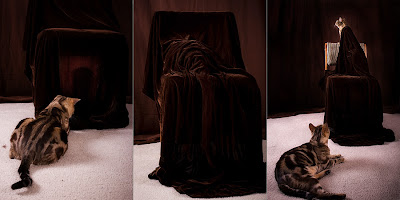 After she jumped away, consequently chased by Cecil, I decided to try a different tactic. What cat can resist catnip? Cecil can, but it sure got the attention of my little kitty-druggie, Squeak. She hopped right up on the chair and proceeded to roll around and around in it. Again, not very photogenic of her not, that she cared about my goal. It didn't take long for Cecil to decide she was having way more fun than he so he joined in. It wasn't pretty, but it's good for cat action shots. 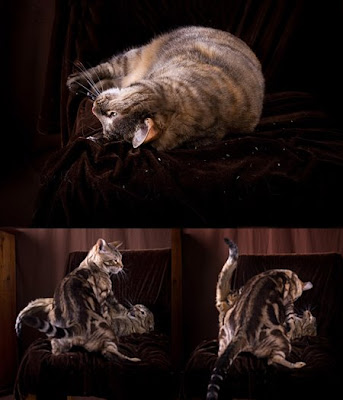 Time to give up on the chair. It just wasn't working out with Squeak continually under it launching herself at Cecil so I decided to try a box. Great idea, she can't get under a box! It turned out to be way too small for big Cecil to be interested in the top side. I tried a bigger box. Cecil circled and inspected it from all sides but the top, again. Soon, he disappeared behind it. I found him mesmerized by a thumb tack in the wall. Placed there to discourage cats getting behind and under the backdrop where they were sure to have more fun than necessary. 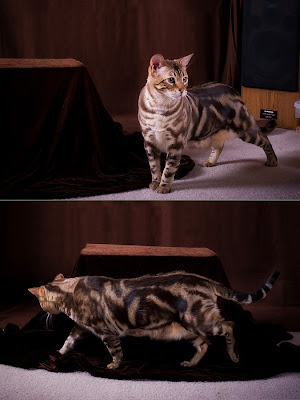 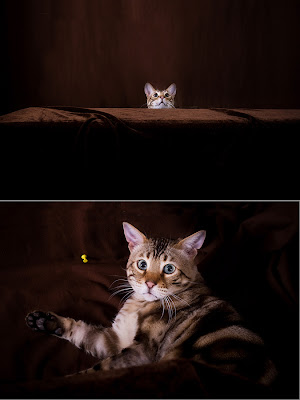 OK, I give up. Lets see what the dog can give me. He will do anything I ask and sit anywhere I want and he will stay put. Outside. It turns out all my teaching him to stay off the furniture backfired with a completely non-photogenic guiltily crouching dog when asked to get on a piece of furniture. In this case, the coffee table. 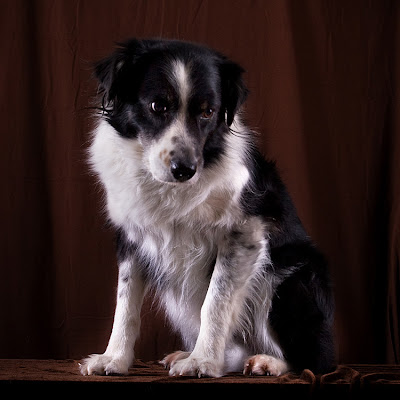 During the attempts to photograph Cody, Cecil decides to goof off on the couch. The couch isn't bad looking so I turned around hoping to catch him striking a pose. I was not so lucky, he was in total fruit loop mode lying on his back and digging between the cushions after another toy. Back to the dog. Once Cecil got sufficiently ignored, he jumped up to take a break, guess where..... the now, undecorated and not in the the ideal circle of light, favorite chair! Uncooperative Toad! Meanwhile, the kitty-druggie, Squeak, is nearby desperately trying to break into the catnip vault. What a zoo! 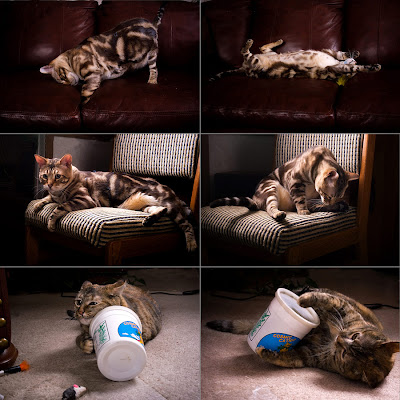 In the end I did get a few decent shots of the sort I was imagining as well as a whole memory card full of them being totally themselves. I really enjoyed playing with the lights and seem to have a grasp on how to work and position them to get what I envisioned. However, I'll admit that formal pet portraiture is definitely not for the feint of heart or patience-challenged. Stalking them with a camera in ambient light is one thing. Getting them to be somewhere specific AND posed is a whole 'nother ball of wax (maybe I shoulda tried that). And to think, these are my OWN pets! I know them and they aren't scared of me either. After the cat fiasco, I briefly thought maybe I could venture into photographing kids..... on second thought, they can be pouty and they have parents! I think I'll be far more successful, not to mention somewhat sane, if I just stick to the equines! 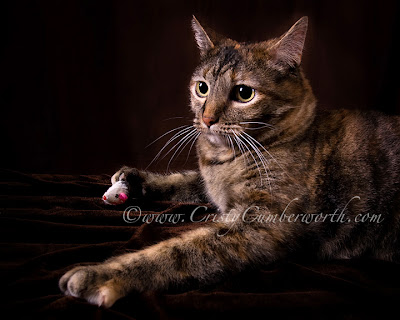 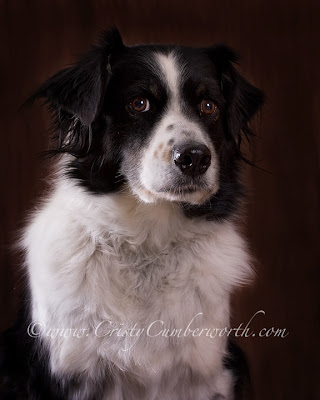 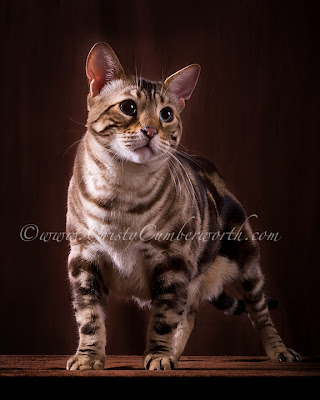 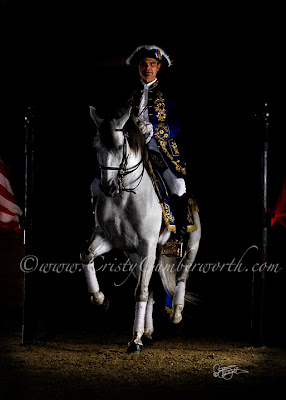 Twice this year I have had the opportunity to mix horses and studio lighting. This first was in Tyngsboro, Massachusetts where we met Jorge Gabriel at his Casa Lusitana. Jorge is one of the kindest people I have met in my travels and he was gracious enough to host Lynne Glazer, Amy E. Riley, April Visel and I for a day. He let us hang around and photograph his regular work day and later in the afternoon he dressed up a few horses to the hilt for us. However the photographic pinnacle of the day was later that evening when we completely took over his indoor riding arena and turned it into a studio. He dressed up one of his Lusitano stallions, Solar, in authentic 18th century dress and performed for us. 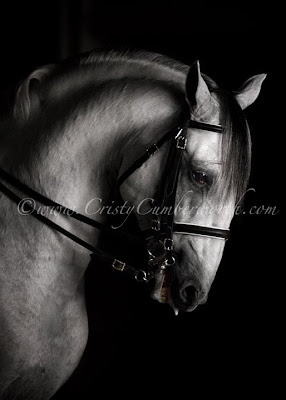 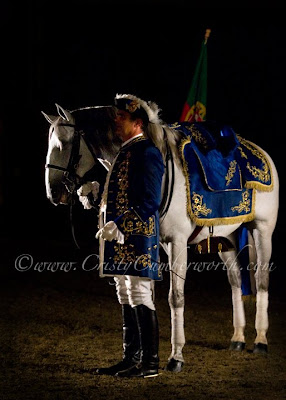 Just a week ago, I was blessed with a second chance to play with horses and lights at Fox Hill Farms near San Marcos, CA. Donna Richardson and her husband and a student each took turns modeling for us with various horses. 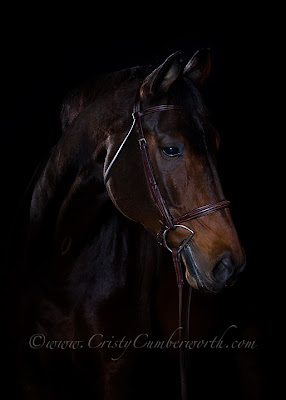 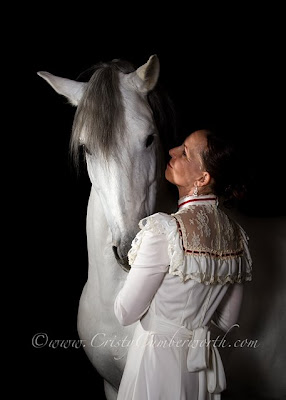 Exuprey, recently returned from the National Horse Show with the title of Working Hunter Champion. Donna later dressed up and brought out her Lusitano Stallion, Postulano for some quality posing. He also took a time out to give fellow photographer and studio lights owner, Marie Cobb some horsey smooches. 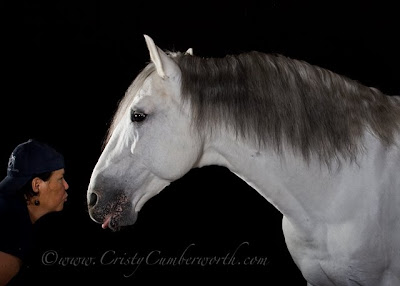 Posted by Ristyz at 1:54 AM No comments: