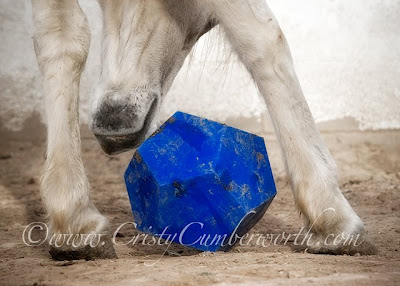 I found the best horse toy ever! Well, actually they sort of found me. After receiving an email from a small company that was looking for images to use in a new iPhone App, I rounded up a couple of peers, Amy E. Riley and Lynne Glazer and we three are now the featured photographers with the majority of the images for the App. The company, called Nose-It, is sponsoring the equine photo-a-day App, called Horse Lover. It's a free app to download from the iTunes store and it will send a horse related picture every day to your iPhone or iTouch. 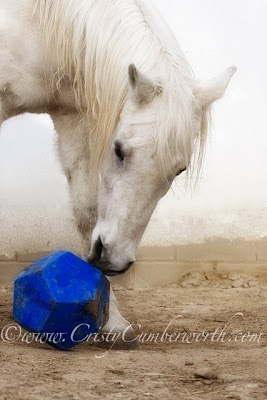 Keith, the Nose-It rep that I was in touch with knew we had our own horses so sent us all some Nose-It toys. I took them out on a sunny day to see if they were a hit with the crew or not. I broke up some hay cubes and put them in the hole in the Nose-It and gave it to the no-brainer. The horse that plays with EVERYTHING whether it be a toy made for horses, the flymask from his neighbor's face or the tank heater... or, even the water tank itself! (He drags that thing around constantly, even totally full but NEVER dumps it over. I don't know how!) Of course he loved the Nose-It. I don't think he even stopped to pick up any treats that fell out. Soon, however, he pushed it too far and it was in his neighbor, Bisti's yard. Big hit there too! Bisti was all about treats and figured out how to get them out but not before spending some time digging, pawing and biting it. 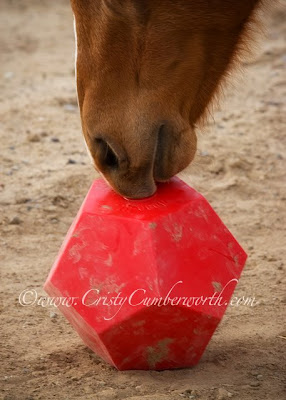 After watching those two, I decided to try it on some of the more skeptical horses. Boomer spent a good long time trying to get his nose IN the hole instead of getting treat OUT of the hole by rolling it. He was just sure it would fit. After a bit he finally discovered gravity and started to roll it around as well. He rolled it until all the treats had come out. I refilled it and took it to Who, the most skeptical of them all, she doesn't play with anything. She approached, gave it a good sniff and like Boomer tried to stick her nose in the hole but very quickly figured out that rolling it was far more rewarding. And there's the clincher, if Mikey, er, Whobie-Doo likes it it must be good. 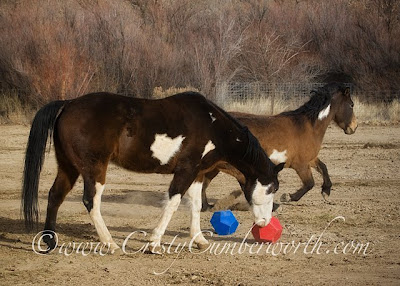 These things do seem pretty indestructible as well and the treats don't just fall out. There is some lip to the inside of the hole so they do actually have to work at it to get the treat out. Now, several months later, they are all still playing with it. Dopey for the fun of it and he still passes it to both his neighbors. Bisti for the food of it and he will still rough it up, paw at it, try to bite it and I've even seen him standing on it once. Boomer and Who for both the snacks and the puzzle of it. They are still pretty certain that their noses WILL fit. I have since given most of the horses at the place a turn with the Nose-It and they all dig it. A perfect toy for the inquisitive, the cookie monsters, the bored and even those that need encouragement to slowly move around for some light exercise therapy. Oh, and the perfect bonus: Because of it's shape, it doesn't ever roll away under the fence and into the trees so there is never a long walk to retrieve it.
Posted by Ristyz at 12:45 AM No comments: