It started on a windy, dusty Friday. Well the ride did, the day itself started quite pretty. On the western horizon, however, was an ominous pink cloud. What was it? Arizona. You see, we could see the wind long before it actually hit our area and it looked as if it had picked up half of Arizona on it's way through.

Check-in for the ride competitors started about 2pm and by then the wind was here and strong. Fortunately it wasn't cold... yet. Everyone that had things to do outside shelter was doing it while also scooping the dirt out of their ears every 10 minutes or so. No one wanted to hang around and chat because that involved opening one's mouth, then you ended up eating dirt too! At least it wasn't cold... yet. Over the course of the afternoon, 35 riders checked in to compete. They got their horses cleaned up for the vet check as best they could in 35mph sustained winds with gusts up past 45mph. At about 5:30 p.m. they held the trail briefing, usually they aren't that early on Fridays but everyone had the same goal... get out of the wind. We also knew that Saturday would not be dusty... it was going to rain/snow soon. At least it wasn't cold... yet. The sideways rain hit at about 10:30 p.m.

Saturday morning was a lot colder, about 32 degrees at sunrise, not as cold as I had anticipated, and there was just a trace of snow on the ground and a light wind. The 30 riders that hit the trail Saturday morning were challenged right away with a log crossing obstacle. Cavaletti in fact. All they had to do was trot through (Open riders had to add a halt well on the other side). There was many different ideas of "trotting through" by the various equines. One of the mules stopped and refused but eventually trotted through. The former eventing horse, who was quite familiar with cavaletti, leapt in then leapt out. 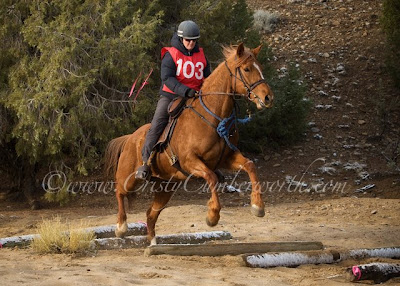 Many trotted the first two and sidestepped out by the middle. Some horses did it just fine regardless of the fact that the cavaletti logs were striped with snow. By the time I took pictures of all the riders in the wind, my hands were quite cold.

I decided to head to the northern reaches of the trail to catch the riders again. The roads were damp but nothing that made me think I shouldn't drive down the big hill. Well, halfway down the big hill, I realized my error... when I was sliding down it on the slick, wet top layer of clay! I got the vehicle under control and slowed to a creep for the rest of the hill, trying my mightiest to stay out of the REALLY BIG RUT on the left. It was deep enough that I wouldn't have left the rut without a lot of help once I got in it. I succeeded and was happy to be on flat ground again. I was fortunate enough to slide sideways again while crossing over a deep arroyo. THAT one scared me! There was a pipe for the water under the road and it was a long way down to the bottom... at least a car length. The road was not very wide over the top of it and I just was not sure my vehicle's hind end was clearing the edge. I made it! Whew! 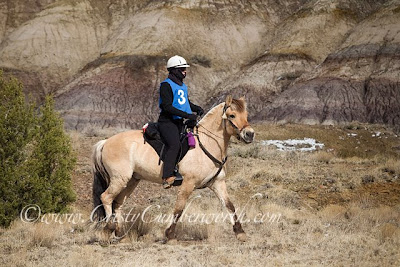 I was quite concerned that I was going to have to go UP that big hill again when I was done. However, with it being windy, it dried out enough to be easily navigable upon my return after taking pictures of everyone again. No more slip and slide on clay and back up on the mesa top where the soil was sandy and I was once again warm and toasty from driving. (Did I mention it was now quite cold outside?)

I went to the lunch area and grabbed a sandwich and headed back out to photograph the riders going down a significant hill. It has been my personal challenge to make a horse going down a hill look good. I succeeded! However the wind picked up off and on and there was sporadic snow flurries too. 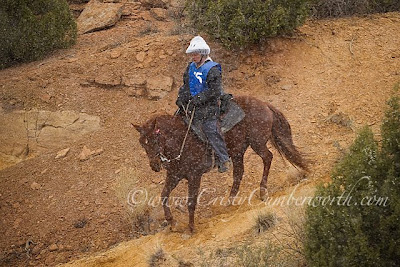 I was getting quite cold out on that point overlooking the down hill. After everyone made it safely down the hill, it was of the sandy soil sort, I went to catch them all one more time near the end of the 20 mile trail (30 for Opens). I got to my place just before the riders came to it, perfect timing!

All the Novice and CP riders made it through and I had to wait a little for the Opens to get there. About 20 minutes later they did. One of the riders wanted to have more than an average trail photo so she decided to do a "trick" for the photographer. I'm guessing that after dusting off and having to catch a car ride to fetch the Mule that had no patience for antics at the end of the day, she won't be trying that again. 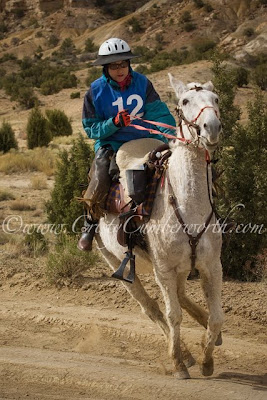 Fortunately she was free of any serious injury despite being dumped on her shoulder after a few rather large bucks. She kept a sense of humor about the whole thing overall and told me later she just wanted me to get a "different" picture. 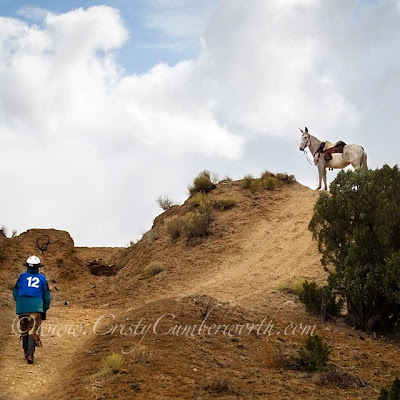 I told her that I got a few alright but probably not the one she had imagined. By now the wind was quite strong again. I was definitely COLD through and through after having been standing in it all day. 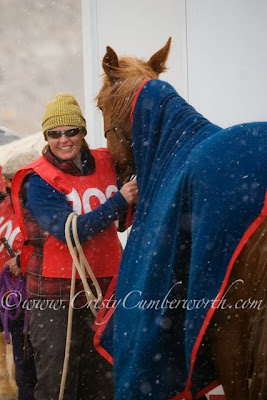 At the Saturday vet check, the wind and the snow flurries continued off and on. Eventually the wind died down and the clouds cleared setting up the night to get REALLY cold. Everyone woke up to a 24 degree, calm, clear, sunny day. I spent my day preparing images while the riders rode their 20 miles. By the time I got to camp to sell the photos it had warmed up to almost jacketless pleasant. Except for a breeze now and again which caused me and many others to keep their jackets close. At the awards that afternoon, our vet judge from Kansas, stated that he had never experienced so much different weather in such a short time. Wind, severe wind with no visibility due to sideways dirt, rain, sideways rain, snow, sideways snow, bitter cold and beautiful warm sunshine. He said it would be memorable ride for sure.
Posted by Ristyz at 1:26 PM No comments: