The last gasp of event shooting before the winter downtime is almost over. Fortunately, it's been a strong fall show season for me and I'm ready to stop driving so much for a while but you can bet I'll be ready to resume in a few months! Unfortunately, for blog entries, there hasn't been much spare time. I decided to at least sneak in a teaser before I dive back into preparing the next batch of images from the NMHJA Fall Harvest show.

A fun motion blur image of a jumper making a tight turn for the next jump. 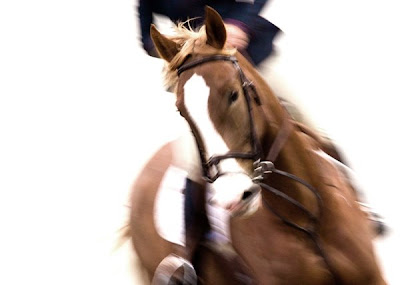 Of course, it was granted.

I first heard of Fanny almost four years ago, in December of 2004. My friend had been helping out a new local start-up horse rescue and told me about the plight of eight horses that were starving on the owners property. Four Corners Equine Rescue found out about them and tried to get the owner to surrender them to no avail. FCER contacted the Livestock Inspector to intervene and the horses disappeared the morning they were to be looked in on. You can read the whole story about that part of their rescue here. Some of the images are not for the feint of heart.

My first involvement with them was by loaning an enclosed horse trailer with which FCER's founder, Debbie Coburn, could go retrieve them. After a brief stay at Animal Haven Clinic, I help arrange foster care for two of the mares, Fanny and Bridget, at our barn, with the care given by my sister-in-law, Tammy. I visited all the surviving horses at the vet clinic and photographed them and petted them and brushed them. I've seen some pretty thin horses but these were walking skeletons.

So, Fanny and Bridget come to stay with us. I was to be Tammy's guide to horse care since she volunteered to care for them but was still a relative newbie to horses. Fanny was ancient at 32 years old and the matriarch of the majority of the group. She was a tough ol' bat. When you approached her she'd pin her ears and practically snarl at you until you caught her. She also tried to beat up Bridget so we had to separate them. It's no wonder she was still alive. I bet she fought hard for every scrap of dinner she could get. Once caught, which was pretty easy if you didn't fall for her bluff, she was just as sweet as could be. I had to coach Tammy a little so she wouldn't fall for Fanny's pretty serious looking bluff. I told Tammy, no matter how mean that horse looks at you, DO NOT YIELD. It's all a bluff, just ignore her and put the rope around her neck, her attitude changes real quick. Tammy followed those instructions and it wasn't long before Fanny quit trying to scare her away. Tammy also discovered that Fanny would make the funniest faces when you scratched her anywhere. Oh, she had favorite spots, but really, any place would do. 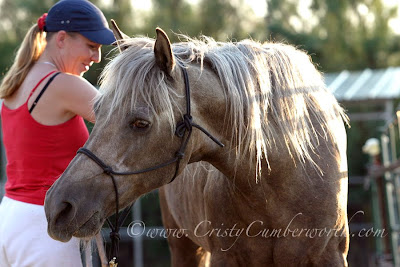 During her first winter at our barn, Fanny suddenly became very lame. We loaded her up and took her into the clinic for a look-see. Turns out she had some pretty serious arthritis in her shoulder. An x-ray proved that it looked more or less like swiss cheese with all the bone degeneration. She had probably once had a pretty serious injury to that shoulder. She had also gotten very, very muddy in her corral at the barn and it was so caked on it was near impossible to brush, or even chip off her. I talked the clinic into letting me use the bovine barn to give her a mid-winter bath with warm water and let her stay in a heated stall to dry. It wasn't hard. I went for soap and soaped her and scrubbed her and rinsed and rinsed and rinsed. It took me a couple of hours to get her clean. The amount of mud on the floor of the barn was pretty incredible. I put her in the heated stall for the night and when I went back the next day she was ready to come home all spic and span with a little bute on board to ease the arthritis pain. She never got that dirty or muddy again all winter. I think she liked being clean!

It took 6 months for the owner who starved them to get to court and have the horses officially turned over to the rescue. Once that happened, Bridget went to stay at the Rescue and Fannie was adopted by Susan, who lives on the barn property and keeps her horses there too. Susan also adopted Magic, the palomino stallion that was out of Fanny. So, Fanny got moved to her permanent corral and her temporary corral got redesigned with double fences for safe stallion keeping. Now Fanny had a forever home with Susan and never even had to leave the place.

Susan adopted Fanny fully knowing that she may not live very long. She was, after all 32 years old. Susan was more than happy to give Fanny whatever she needed for whatever remainder of her life she had left in her. Three and a half years, it turned out, against all expectations. 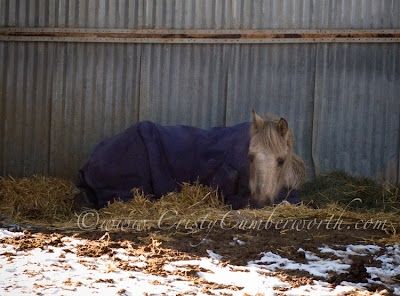 Fanny still had some bad days and had to go back to the vet here and there. More than once we thought it was the end for her but once she got out of the trailer at the clinic she was just as content as could be. It was almost like she just wanted a trip to the equine spa for a day or so every now and again. She was gimpy from her arthritis and she was beginning to founder a little but she refused to give it up. Her official vet-directed therapy was to be turned loose to roam whenever possible. So, we let her.

Fanny would roam the place and often we would come around a tree and she was just there, minding her own business, nibbling at grasses or not. She often took extended naps under the Tamarisk trees in strange places. We have people that rent corrals to keep their own horses in. She would often scare the boarders in various ways. We would forget to let new boarders know that Fanny had run of the place. Several times I got a call from a new boarder to let me know there was a loose horse and I would have to explain that Fanny lived there and she was allowed to roam freely for her therapy. She never bothered any of the boarders or their horses. Sometimes when I was at the barn I'd run into a boarder and I'd end up with a story of how recently Fanny scared them..... power napping in odd places. Not moving a muscle. They would tiptoe over to see if she was still breathing and she'd flick an ear. Whew! No one wanted to be the one to tell Susan her horse died under a tree somewhere.

Despite all the momentary fears instilled in many people, including myself and Tammy, over the last three years by a loose horse or a power napping horse. Susan was just sure that Fanny would tell her when she was ready. Despite all the aches and pains, Fanny refused to give it up. She looked bad sometimes but every time Susan or Dr. Quintana would ask, Fanny said "not yet." Well, tonight, Fanny changed her mind. After a lower than normal water intake over the last 12 hours and a totally missed bonus lunch, Fanny picked her place. When Susan fed the whole crew at about 9:oo, Fanny was just hanging out under a tree. About an hour later, Susan went to fetch her to put her away for the night and found her lying down and not wanting to get up. Susan called me and we sat next to Fanny for a little while and contemplated calling the vet. We tried to get Fanny up once and Fanny tried a little but wasn't very interested. We talked about her and how is was a nice place under a Tamarisk and beautiful moonlight. Fanny had picked her spot, it seemed. 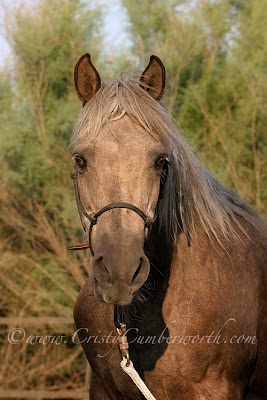 We called the vet. He came and checked her out. Her heartbeat was irregular and had a bit of a swoosh sound to it that wasn't there before. He let both Susan and I listen. It was kind of like the heart valves weren't in a hurry to close anymore. Her temperature had started to drop some and her reaction to being pinched on her pasterns was very slow. The vet said he didn't see any reason to try and fight it off, she picked her time and her place and that he would grant her wish of going with dignity. He went back to his truck and drew up the kindest drug and whispered to her and petted her as he gave it to her. And we waited. Her brain died peacefully then her body reflexively fought for a few more breaths and then all was still.